I do confess to having an enormous soft spot for this sweet boy Charlie Chops the golden Labrador from Surrey.

He was adopted as a rescue found wandering the streets with a very badly deformed wrist joint. His devoted owner feeds him a 100% plant-based diet and being a rescue and a Labrador, means that he just loves whatever he is fed and he is very prone to putting on weight which affects his joints further.

When I received this message from his owner, I felt that I had to help, and share in Charlie’s new feeding regime with other owners who may have a similar problem with their dogs.

“Chops has to have two new hips we think which is a bit of a shock and we have to get this weight off him. Our vet wants him on a prescription diet but it isn’t plant based so we are worried as apart from the weight he has been doing so well.

I worry that he is hungry all the time at the moment as his portions of Solo Vegetal have had to be cut down. The family are considering what the vet said but I am reluctant but don’t want to push my beliefs on Charlie.

His coat and his glands and everything is brilliant on the food but his weight and Ozzy’s both ballooned as they love the food so much!” 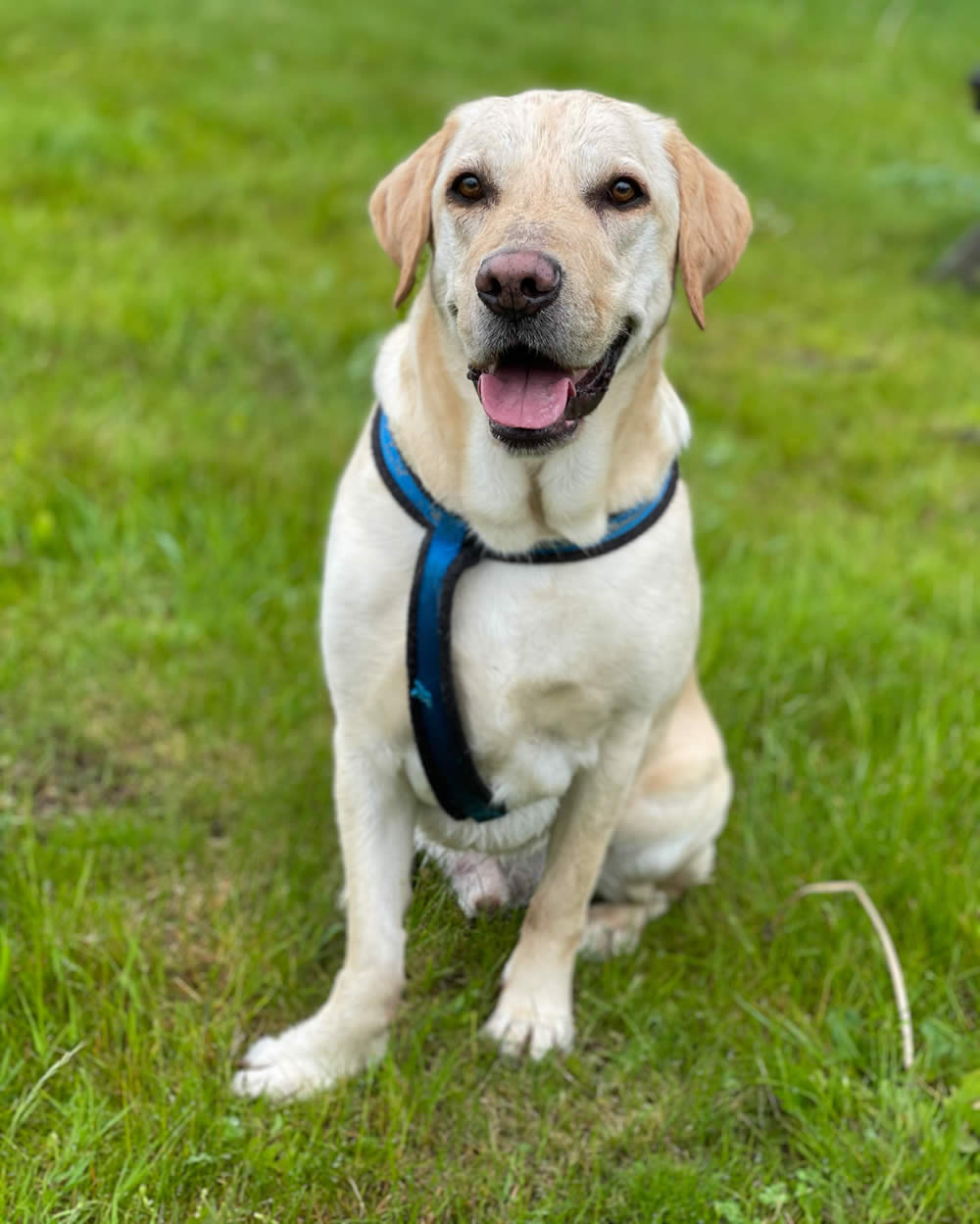 Yes, it IS possible for our dogs to put on weight when eating plant-based (just as it is possible with us – I am proof of this:)  All the plant-based tinned and dry foods are made to be as palatable to our dogs as the meat-based dry foods, and as owners we love this as we just want our dogs to be happy…..so we overfeed without even knowing it as we just want them to enjoy their food!

What all vets recommend, is that you cut down the portions fed, but then just as Charlie’s owner noted; he is hungry all the time and that is not what we want for our dogs, plus they lose out on valuable nutrients if the quantity of food fed is decreased. We also definitely do not want to go down the meat-based expensive diet foods from vet practices as they are not sustainable by any means (full of meat products, expensive and unpalatable), so we have the perfect solution for Charlie Chops –  our Green Paws Supergreen Supplement and the super easy ‘vegetable weight loss plan’.

All his owner has to do is feed Charlie his favourite food as normal in the morning (his Solo Vegetal or Green Crunch) and then replace his evening meal with a bowl of cooked vegetables that she has in her fridge or freezer or garden (any vegetables except onions or leeks).

The combination of colourful vegetables with a tiny sprinkling of the Green Paws Supergreen Supplement to provide the added antioxidants and extra amino acids needed (including the metabolism boosting L-Carnitine that is found in all diet pet foods) + some nutritional yeast to add extra B vitamins and flavour, make up a very low calorie and nutrient dense easy bowl of wholesome healthy food for your dog!

See how much Charlie loves his bowl of daily vegetables in this great video made by his Mum. What a success for his future health as his weight will now be kept under control so safely and easily!

Read more about our Supergreen Green Paws Supplement here
Read about Billy who lost a staggering 6kgs on his homemade wholefood diet! 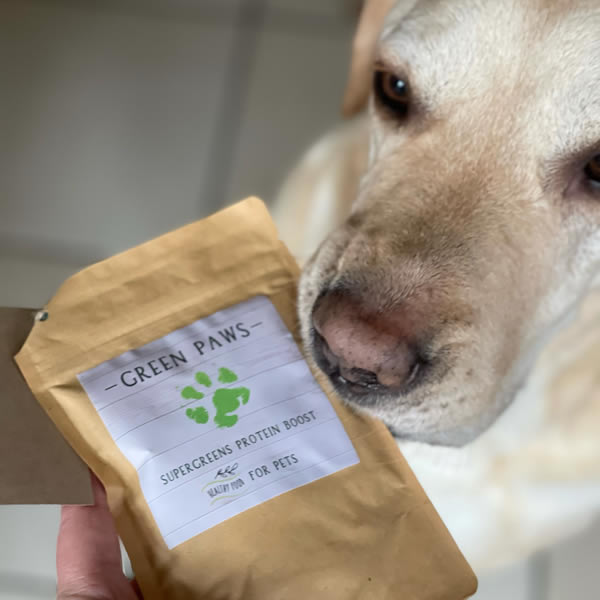 What else do we advise for Charlie’s arthritis that is kind and vegan? 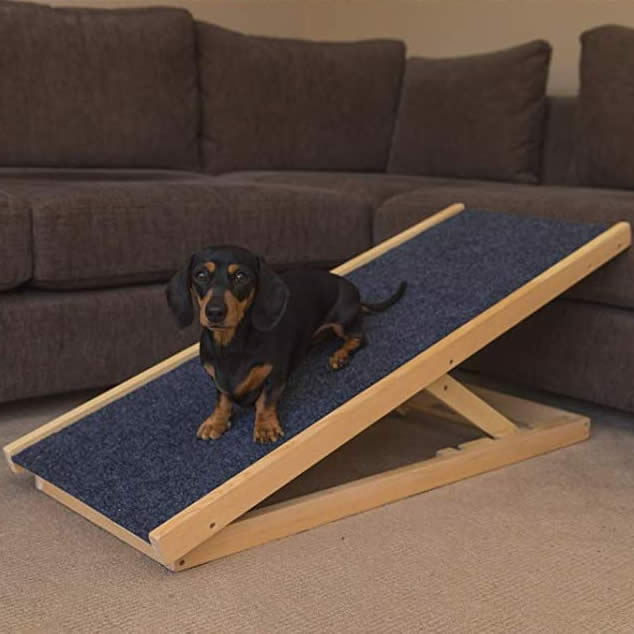 Like non-slip mats, this is possibly one of simplest and most effective investments that you can make for your pet – a ramp to support your dog’s joints when they climb onto their favourite sofa, bed or into the car!

Ramps prevent the jolting action on the knees when they spring onto the sofa or into the car. The impact of your dog’s full weight is felt in their knee or stifle joints and many dogs suffer from ligament rupture or damage from jumping. The amount you will save in veterinary bills from having a £35.95 ramp in your home and car is definitely worth it!

The simplicity of a ramp prevents injury while they are young and as they get older, it allows them a pain-free way of still being able to climb up next to you on the sofa or go into the boot of the car without any form of pain or discomfort  – an investment definitely worth making that is both kind, simple and effective for the lifetime of your pet! 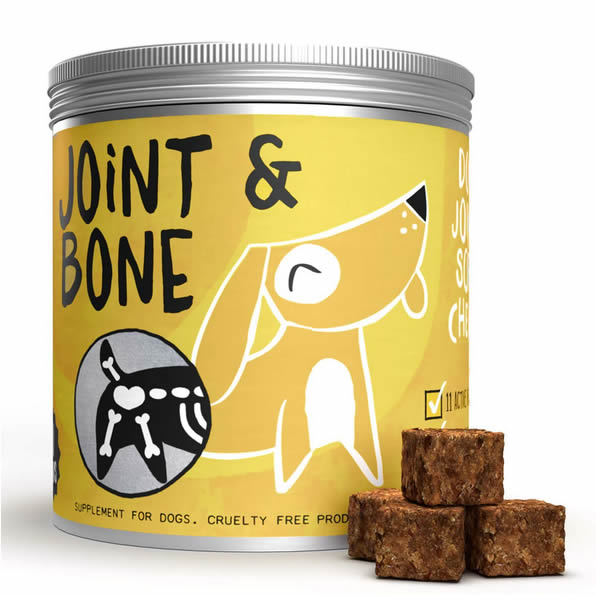 Taré Pets Joint & Bone Supplements launched in 2021 and took 2 years to develop with the manufacturers ensuring that every ingredient was sourced as sustainably as possible, right down to the packaging. These very palatable vegan soft chews are packed with nutrients to support your dog’s joints over their lifetime.

These ingredients all combine to offer your pets natural joint pain relief in a very tasty soft chew that can be given as a ‘treat’ to your dog they are that delicious. Highly recommended! 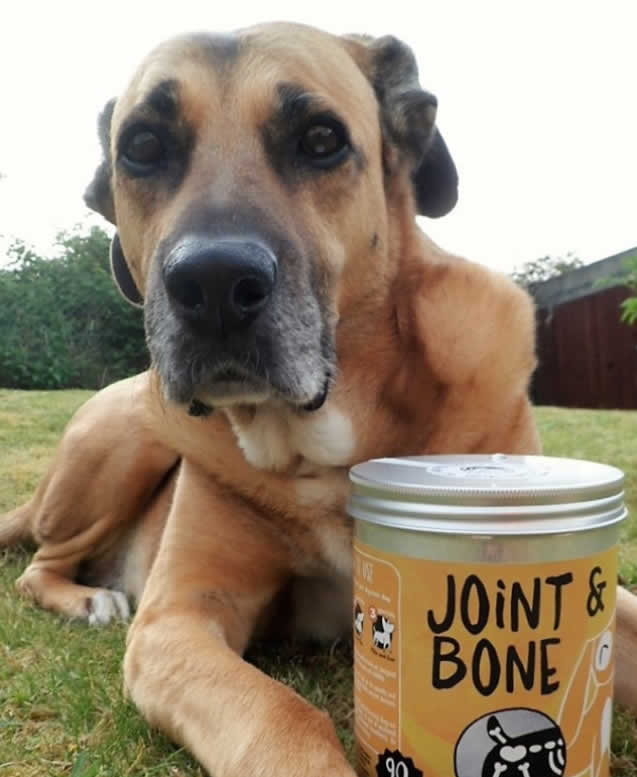 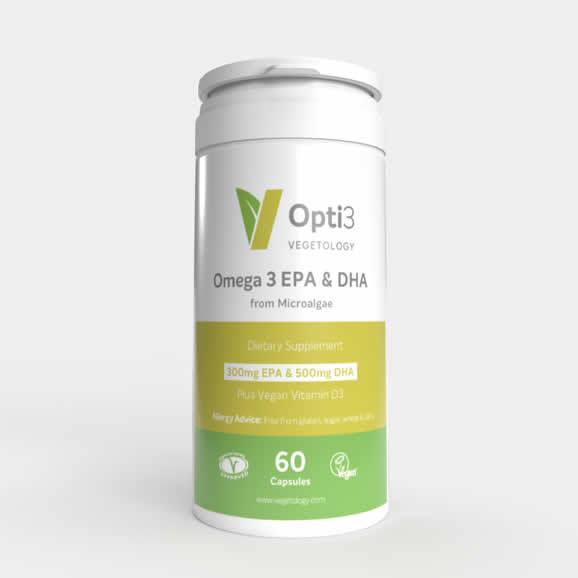 Omega 3’s in our pets have a number of essential roles such as supporting a healthy immunity as well as a super-soft coat, but high levels of natural Omega 3 are also vital in acting as natural anti-inflammatories in the painful joints of our pets. Omega 3 fatty acids in dogs have to be EPA and DHA rather than alpha linolenic acid (ALA) which they don’t utilise well (as found in flaxseeds).

We have chosen Vegetology Omega 3 Algae Oil capsules as they are very cost-effective compared to all the other brands of Omega 3 capsules, and dogs really love the taste! It also contains 5μg of Algae oil Vit D3 in every capsule so is ideal for dogs being fed a natural wholefood plant-based diet.

The dose to give is 1 capsule every day for an average 25kg dog. 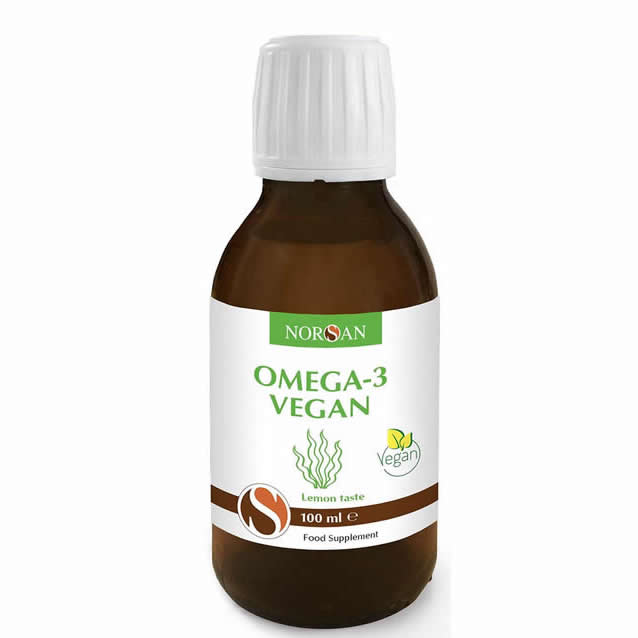 Omega 3’s in our pets have a number of essential roles such as supporting a healthy immunity as well as a super-soft coat, but high levels of natural Omega 3 are also vital in acting as natural anti-inflammatories in the painful joints of our pets. Omega 3 fatty acids in dogs have to be EPA and DHA rather than alpha linolenic acid (ALA) which they don’t utilise well (as found in flaxseeds).

We have chosen Norsan Omega 3 Algae Oil as it contains a whopping 2g of Omega 3 fatty acids (609mg EPA, 157mg of DPA and 1158mg of DHA in 1 tsp!) This makes it the most highly effective and reasonably priced source of natural cruelty free Omega 3 to feed your pets. It also contains 20μg of Algae oil Vit D3 in every 5mls so is ideal for dogs being fed a natural wholefood plant-based diet. 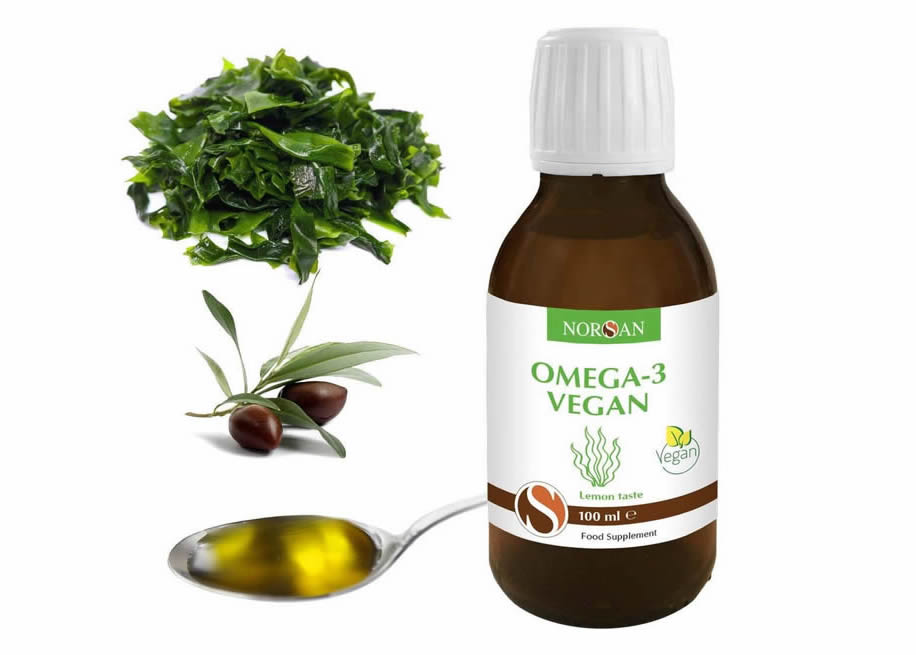 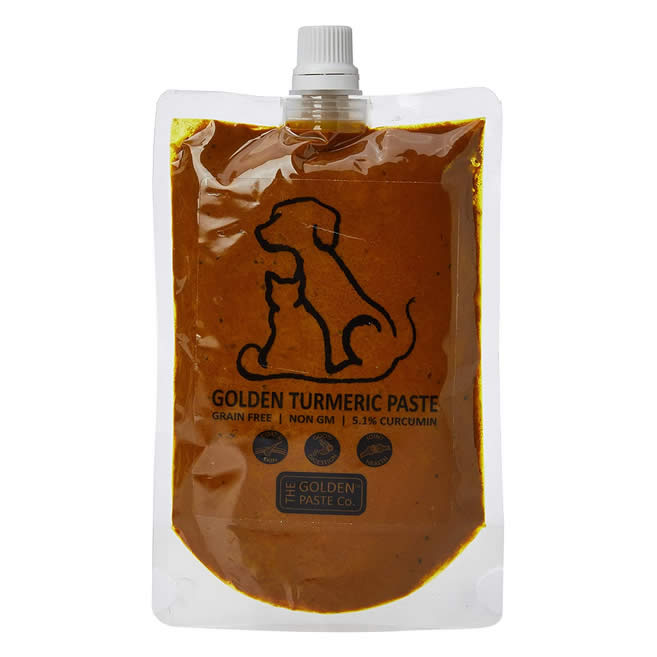 Many owners choose to feed their dogs natural plant-based sources of anti-inflammatories such as found in turmeric and black pepper. It is possible to make your own mixture of Golden Paste with turmeric and the dose to feed would be 1 tsp twice daily for an average 25kg dog. Read more about how much turmeric is safe to use in humans here.

How to Make Golden Paste

If you prefer to buy some ready-made Golden Paste made up of turmeric, cold pressed coconut oil, apple cider vinegar, ceylon cinnamon, black pepper, citric acid and potassium sorbate, it can be purchased here for just £7.99 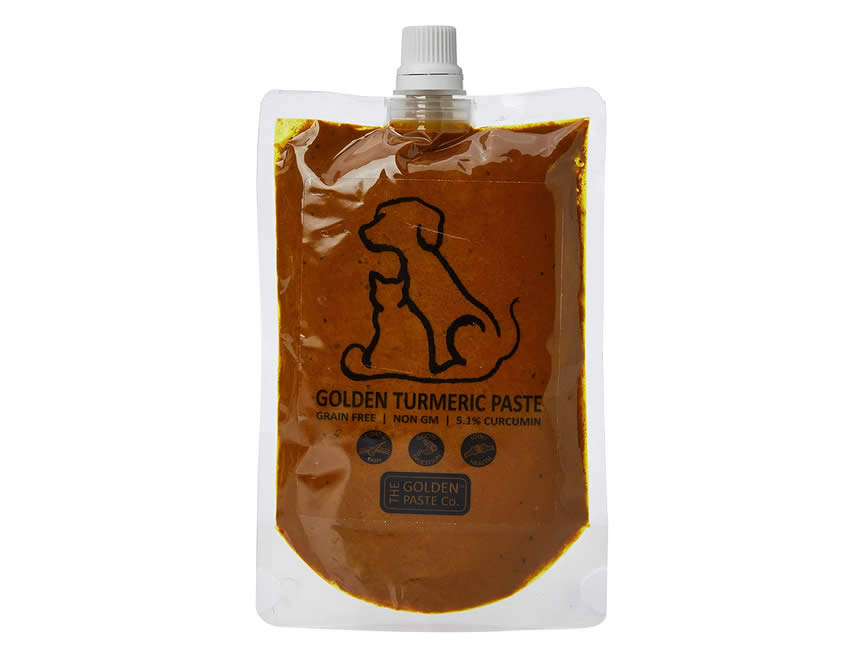 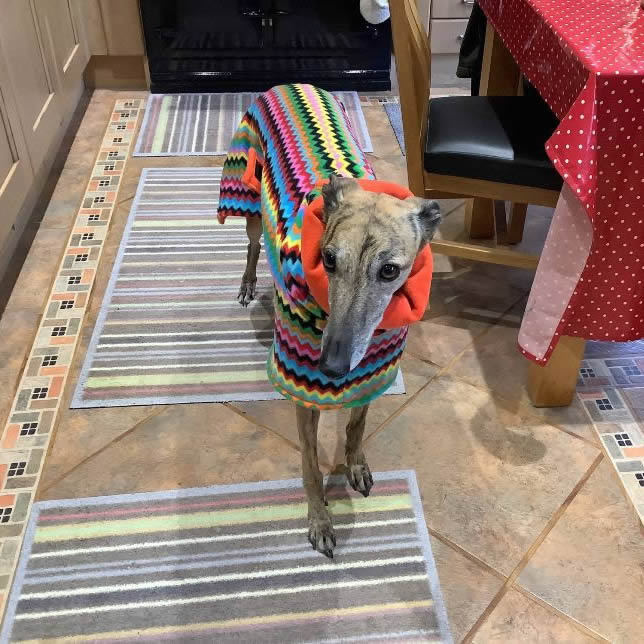 Why are non-slip mats invaluable for our pets?

This is possibly one of simplest and most effective investments that you can make for your pet – non slip mats on all those slippery floors in your home! It is so important when your puppy grows to allow the joints to develop fully without them slipping on floors daily when they get excited or jump up or do zoomies – this can be very damaging on growing joints especially hips, and lead to painful arthritis when older.

Having non-slip mats down on your kitchen floor and hallways is the kindest and simplest support that you can give to your elderly dog who may still have the energy to jump and run around and any slipping again can impact so badly on already sore, swollen joints – whether in the knees, hips or even in their front legs.

There are very reasonably priced non-slip mats available as shown here for under £13, or you could consider investing in more expensive and stylish washable turtle mats as shown being modelled by rescue Greyhound June below. These have lasted June’s owners over 9 years and been through so many washes and their value in supporting June and her sister April’s joints in that lifetime is priceless! 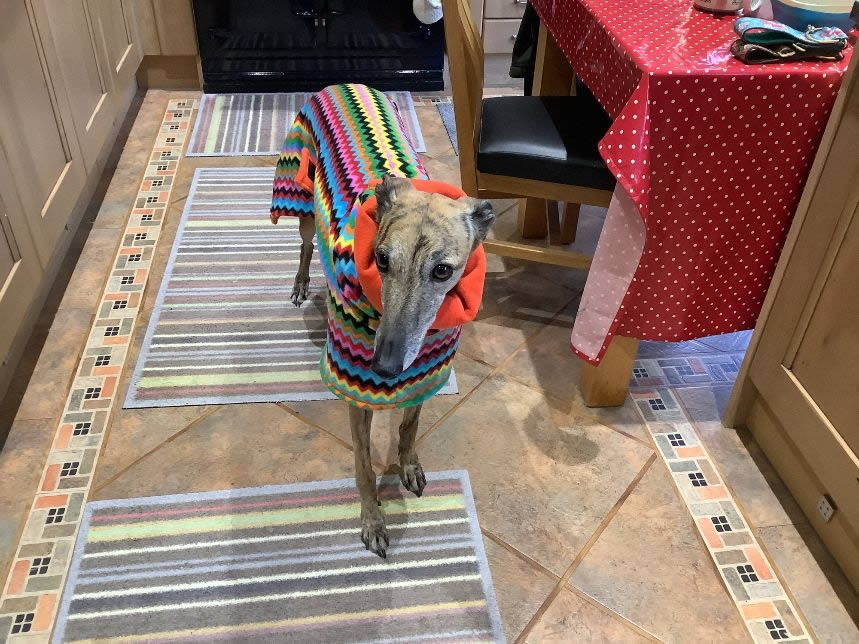 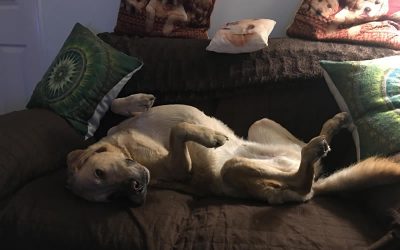 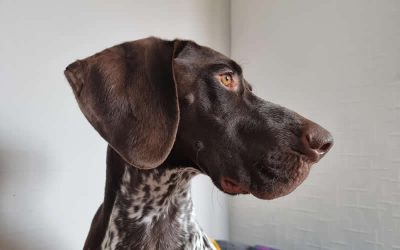 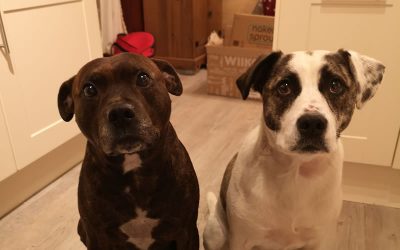 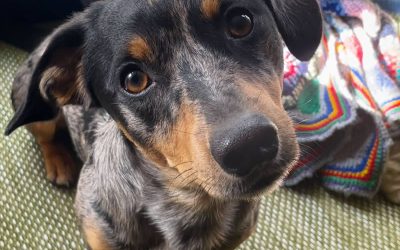 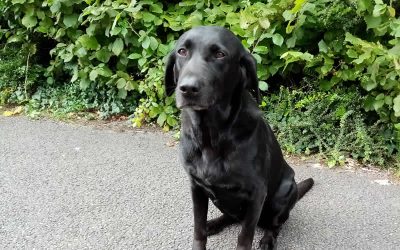 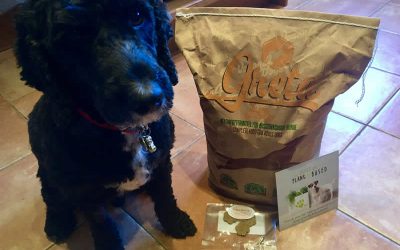