I had such an awful time, so I’m happy to share my experience to help others. It’s such a terrible place to be in, I’ve never felt so stressed and helpless. From the vet being so concerned that they thought he would eventually have to be put down, he was 1.5 at the time, he’s now 2.5 and thriving thanks to a plant-based diet!

Buddy’s Story as told by his Mum

Buddy’s journey with allergies started in January 2020 when he was just 5 months old with an ear infection, however, despite treatment this would not clear up.  It was at this point that I was told that his ear infections were likely caused by an allergy.

At the time, he and his sister Beau were fed on a premium brand breed specific food and our local vet suggested changing his diet to white fish-based diet as it was less of an allergen.

Within 30 minutes of his first meal, buddy was itching, open sores had appeared on his cheeks, his claws all crumbled and split and his legs were covered in lumps. 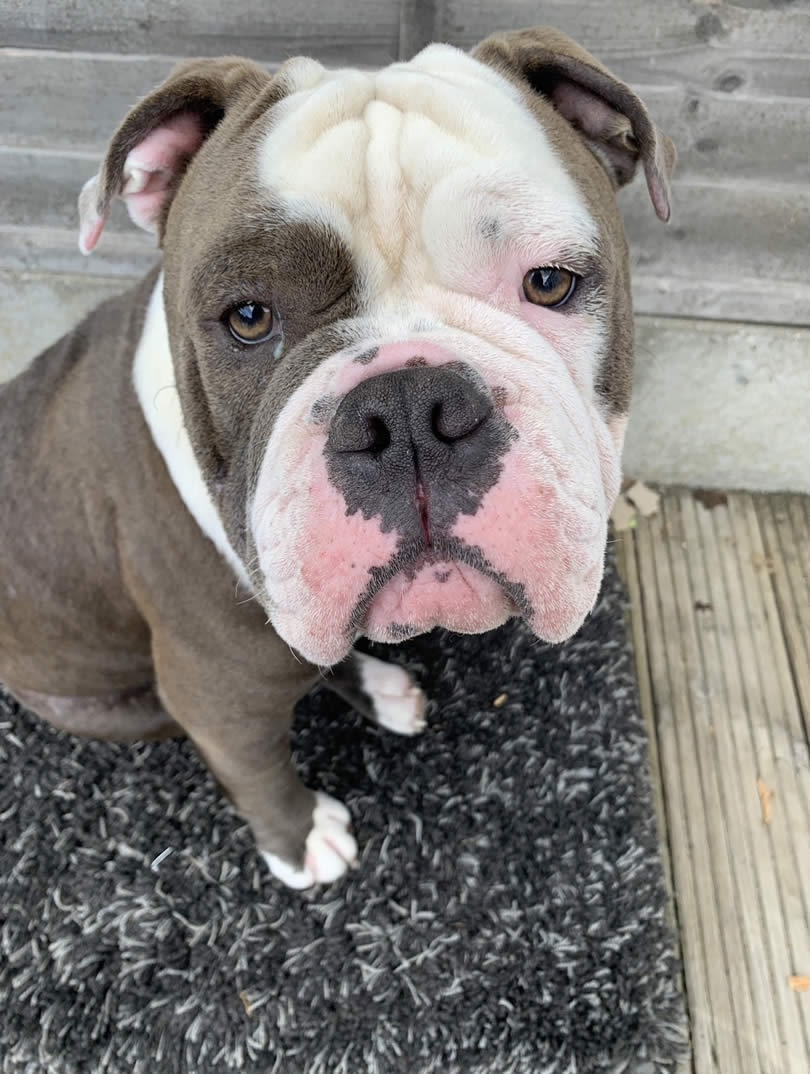 Horrified, I rushed him to the vets where I was told to take him off the new food and go back to the old, he was given steroids and pain relief.  The steroids seemed to help and he seemed to improve, until the course finished.  Within days the open sores were back, his ears were crusted and he once again had lumps on his legs.

I returned to the vets and was told to try ‘novel’ proteins. I tried everything –  kangaroo, rabbit and even black fly, but nothing worked.  We tried hydrolysed protein dog food and while this helped a little, neither dog wanted to eat it.

He was on almost constant courses of antibiotics and steroids and I was a regular at the vets – at least fortnightly.  We tried Apoquel and it failed, it just made him sick.  After several months, the vet gave me the news that it was not looking good for Buddy…..the ‘E’ word was used, and I was told the last hope was to refer him to a vet dermatologist in Newmarket.

I left feeling heartbroken and pretty much hopeless.  Our appointment was a one day clinic in October 2020 where a panel of blood tests were run, including a full allergy test.  It showed that Buddy had severe allergies to all meat and fish proteins.

The dermatologist explained that he needed to be on a vegan diet and so did Beau as there would be a transfer of protein from rubbing noses.  I was very concerned about the idea at the time and asked a lot of questions, like a lot of people I thought dogs needed to eat meat.

The dermatologist reassured me and told me that dogs are omnivores and can live a full and long life on a vegan diet and sent us home with a bag of Solo Vegetal dry food.  Still feeling unconvinced I took him home and started the new diet.

I can only say I was amazed on many levels, first of all on how much Buddy and Beau enjoyed the food but mostly by the improvement in Buddy’s condition.  His sores started to heal, the itching stopped and his ears cleared up.  We’ve stuck with the food ever since and it’s changed our lives.

I may still have to take him to the vet now and then because he’s stolen something to eat, he has a shot of Cytopoint and then we are more careful and he’s fine again.  I’ve gone from fortnightly to roughly 8 monthly vet visits. It really has saved Buddy’s life.  Overall I spent in excess of £4,000 on vets bills and food that was wasted.

In May 2021 we got a new addition, Freddie a Frenchie puppy.  Recently, Freddie had BOAS surgery and as part of his recovery had to have Chappie fish and chicken-based food, however, it was a struggle to get him to eat it – he wanted his Solo, so I’d say to anyone thinking of changing, try it, my dogs love it and it has been life changing.

Just one thing to remember, some worming tablets are meat based so make sure anything given to your dog is meat free if they are as allergic to meat protein as Buddy! 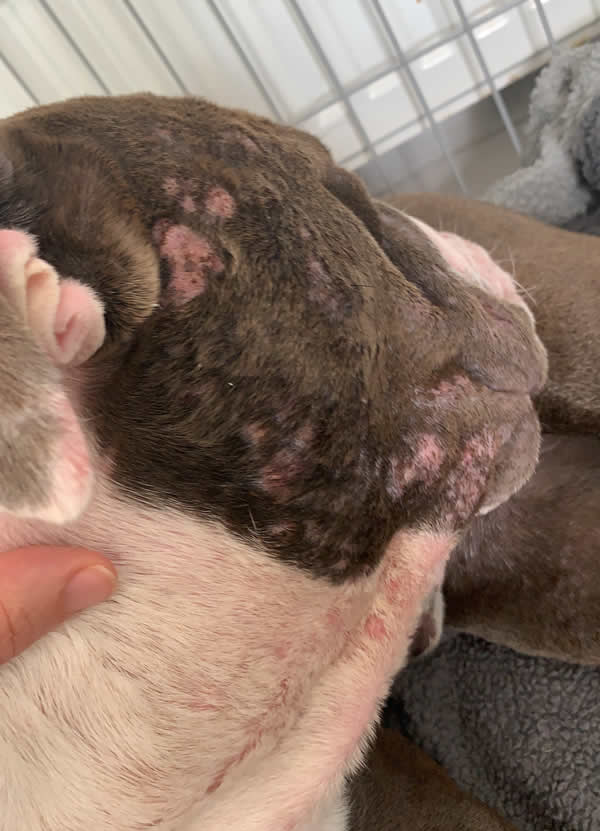 I had such an awful time, so that is why I am sharing my experience. It’s such a terrible place to be in, I’ve never felt so stressed and helpless. From the vet being so concerned that they thought he would eventually have to be put down, he was 1.5 at the time, he’s now 2.5 and thriving thanks to Solo Vegetal! 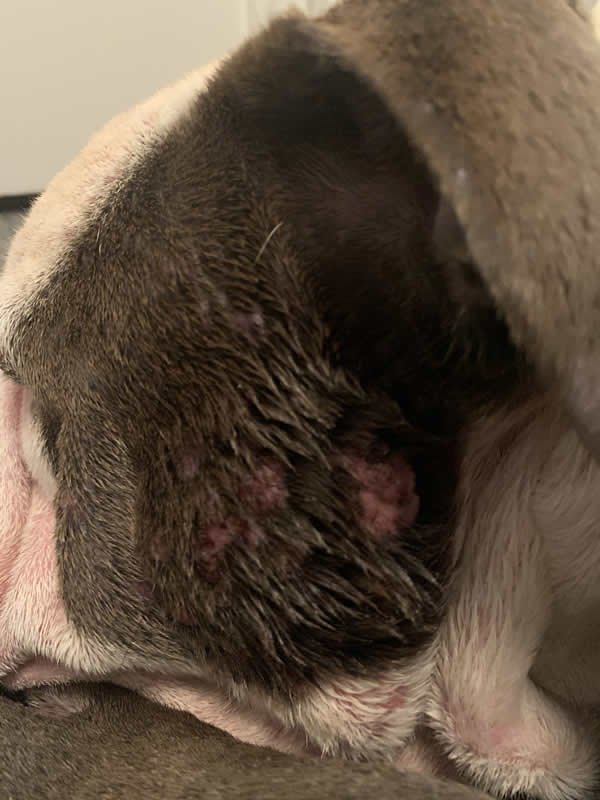 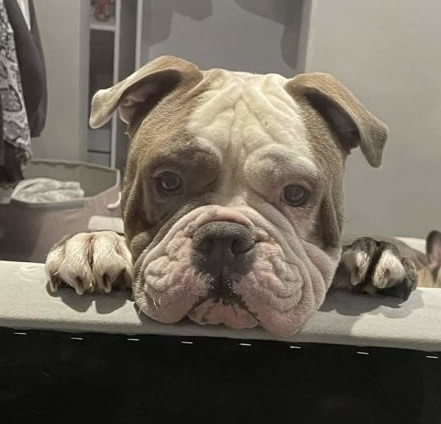