My dear strong but very elderly and proud French Mum died today 2 years ago – as she wanted it – in her bed at home – the bed she had had all her life, with her 3 daughters and loving husband with her. It was both beautiful and emotional to witness and every year around this time I wonder why a small grey cloud hangs over me.

The little cloud is a reminder of the time spent caring for my elderly Mum before she died as she cared for me in her life and I know that from today, I can look forward and be happier.

The yearly cycle of grief seems to be one that is not unique to us, but to elephants too. My Dad told me about a recent talk he had been to given by the wife of deceased conservationist Lawrence Antony where a herd of elephants had been rehomed by Lawrence Antony and they returned from the bush to his home exactly a year after his death to mourn quietly as a herd together and remember him.

I found this clip about this remarkable man who had a passion to help these incredible animals –
Lawrence Anthony was born on September 17 1950 in Johannesburg, where his grandfather, a miner from Berwick-upon-Tweed, had emigrated in the 1920s to work in the gold mines. His father founded an insurance business and, as he established new offices around southern Africa, Lawrence was brought up in a series of small towns in rural Rhodesia, Zambia, Malawi and finally Zululand, South Africa.

Anthony followed his father into the insurance business and later worked in property development. But his heart was always in the African bush he had loved as a child. He became involved in working with Zulu tribespeople to try to rebuild their historical relationship with the bush, and in the mid-1990s he decided to turn his hobby into a career, buying the 5,000-acre Thula Thula game reserv 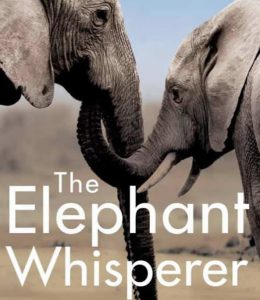 Subsequently he founded the Earth Organisation, a conservation group that encourages pragmatic local action, and was instrumental in the creation of two new reserves, the Royal Zulu Biosphere in Zululand and the Mayibuye Game Reserve in Kwa Ximba, which provide local people with jobs and income through tourism, while helping to secure the future of the region’s wildlife from creeping development.

Elephants had never been part of Anthony’s plan for Thula Thula, but in 1999 he was telephoned by a conservation organisation which asked whether he would be willing to take on a herd of nine animals which had escaped from every enclosure they had ever been in, wreaking havoc across KwaZulu-Natal, and were considered highly dangerous. Realising that the elephants would be shot if he declined, Anthony agreed to give them a home.

“They were a difficult bunch, no question about it,” he recalled. “Delinquents every one. But I could see a lot of good in them too. They’d had a tough time and were all scared, and yet they were looking after one another, trying to protect one another.”

Anthony decided to treat the elephants as errant children, working to persuade them, through words and gestures, that they should not behave badly and that they could trust him. He concentrated his attention on Nana, the matriarch of the herd: “I’d go down to the fence and I’d plead with Nana not to break it down,” he said. “I knew she didn’t understand English, but I hoped she’d understand by the tone of my voice and my body language what I was saying. And one morning, instead of trying to break the fence down, she just stood there. Then she put her trunk through the fence towards me. I knew she wanted to touch me. That was a turning point.” Soon they were allowed out into the reserve.

Anthony and his wife, Françoise, became so close to the elephants that on some occasions they almost had to chase them out of their living room. Days after Nana gave birth to a son, she emerged from the bush to show off the newborn to her human friend. A few years later, after Anthony’s first grandchild was born, he returned the compliment, though he recalled that it was some time before his daughter-in-law would speak to him again.

He told the story of the elephants in The Elephant Whisperer (2009, also co-written with Graham Spence).

• 1 apple
On drive back from Aldi (bad time to shop when hungry!) –
• 1 macadamia and coconut bar – expensive and not great
• Small packet pea snacks

• A ‘made out of my head’ meal of tofu cooked in grated fresh ginger, chili from jar, garlic, nigella seeds, sesame seeds, tahini paste, red pepper sliced finely, tahini paste, maple syrup and soya sauce
• Rice and mange tout
• 2 satsumas
• 1 nectarine
• Half a delicious sharan fruit (I love them if they are ripe -eaten with skin and bought from Aldi)
• 4 squares Green and Black 85% dark chocolate
• Cup mint tea and so enjoy BGT semi-finals and relaxing