The recent craze to feed our dogs more and more meat (raw or cooked) in their diets comes from the untrue conclusion that dogs need an ancestral diet as they are perceived to be carnivores.

Wolves in the wild are so very different in every capacity to our domestic dog. They hunt in packs and will normally only make a kill possibly once a week so they would never eat a high saturated fat and high meat-based diet every day; let alone twice a day as pet dogs are being fed, without the physical effort of the hunt! Interestingly, wild wolves have been shown to ‘forage’ in the summer for berries as shown in the YouTube clip attached!

The most thorough published proof that we have that the digestive system of the dog is different to wild wolves was a fascinating study done at the university of Uppsala in Sweden in 2013 that shows that as dogs have evolved alongside us, their digestive processes have evolved too. 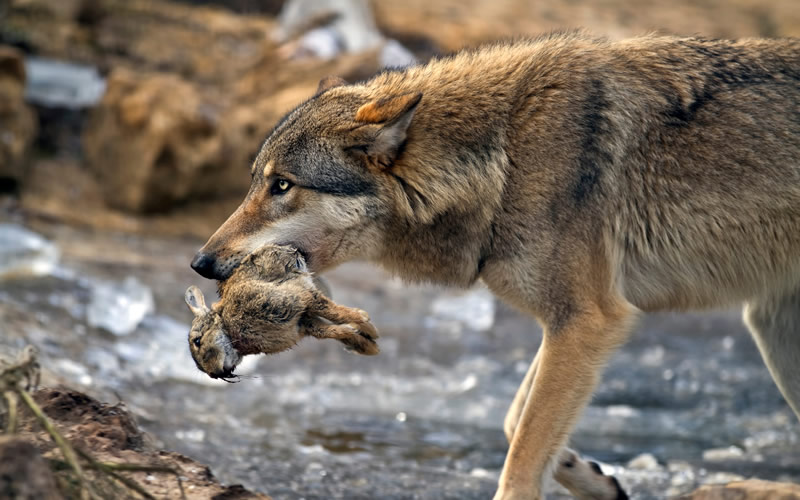 Our modern dogs produce longer chains of specific digestive enzymes that are adapted for digesting starches and grains – not meat. Dogs produce the enzyme amylase, which is present is the human digestive system (including our saliva) and allows us to digest carbohydrates. This is a result of thousands of years of evolution in conjunction with humans.
Want to hear more? Watch the full YouTube clip all about raw feeding here

Why is raw feeding so popular?

There are over 100 online pet food companies that have sprung up in the last few years selling raw food diets or very high meat or fish diets to our dogs as the online community influences people’s opinions. Feeding such a high meat content to our pets has brought about more issues with our pet’s health than the pet food companies realise. We are very aware of the dangers of eating meat but it is such a profitable business that these dangers are hidden in the flashy advertising presented to the public.

The very first incorrect advertising that has been presented is that dogs are descendants of the carnivorous wolf so they too must be carnivores. Our dogs are omnivores and have always been omnivores – feeding off our table scraps until pet food became big business in the 1800’s. They do belong to the order Carnivora, but then so too does our bamboo-loving panda bear belong to this order who has never tasted meat or fish and thrives on shoots and leaves!

Other descendants of the wolf over the years include not only our domestic dog, but also animals belonging to the order Hyaenidae such as the brown hyena (shown in the first attached image). They appear extremely dog like in their appearance but they have branched off and adapted to living in the harsh african conditions as natural scavengers with an acute sense of smell and apart from scavenging insects, small dead rodents and other prey; they obtain their protein source in the desert by sniffing out desert truffle  – a type of fungus called Kalaharituber pfeilii.

The second image shows the beautiful and very shy aardwolf – another species that branched off in evolution just as our domestic dog did hundreds of thousands of years ago from the common wolf ancestor – it is a nocturnal feeder that feeds exclusively off 2 species of termites that provide it with all the protein and vitamins that it needs without any meat in its diet at all! 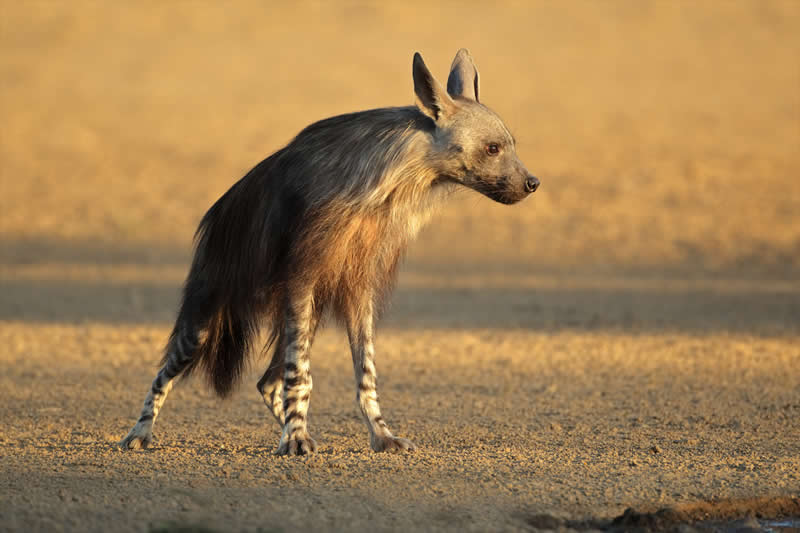 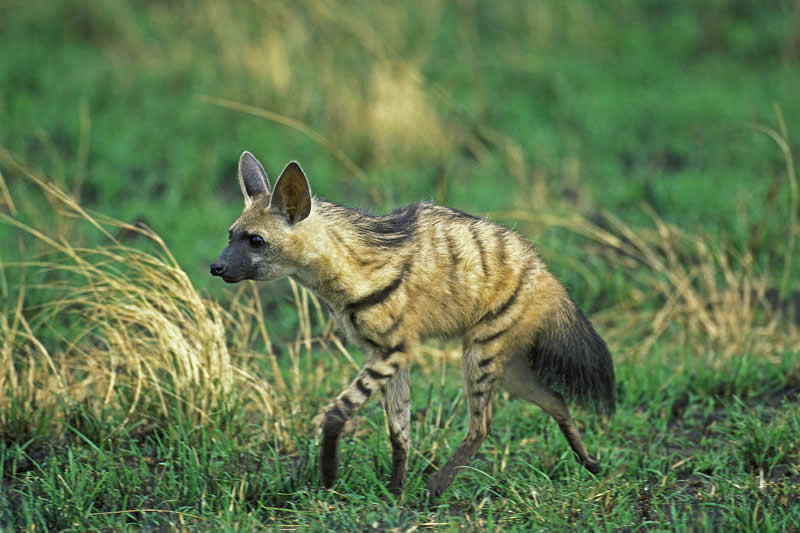 Should this beautiful animal change the way we think about our dog’s nutrition?

This striking animal shown here in captivity; is a maned wolf (Chrysocyon brachyurus) and it is the largest canid in South America.
His marks resemble those of foxes, but he is not a fox or a wolf. It is the only species of the genus Chrysocyon (which means “golden dog”). 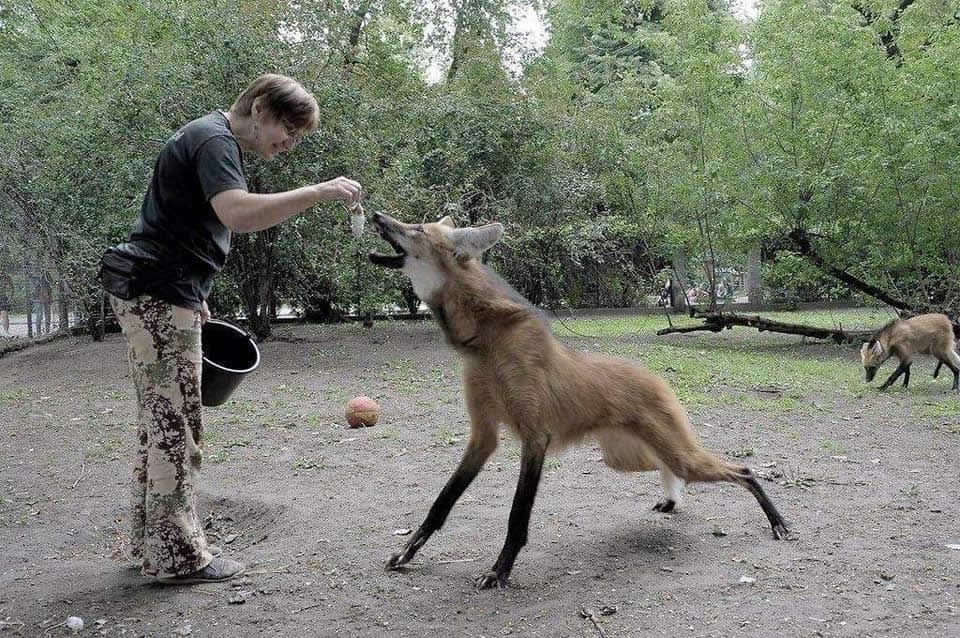 Although the maned wolf displays many fox-like characteristics, it is not closely related to foxes. It lacks the elliptical pupils in its eyes found distinctively in foxes. The maned wolf’s evolutionary relationship to the other members of the canid family makes it a unique and fascinating animal.

Why should a maned wolf hold the key to our dog’s nutrition? 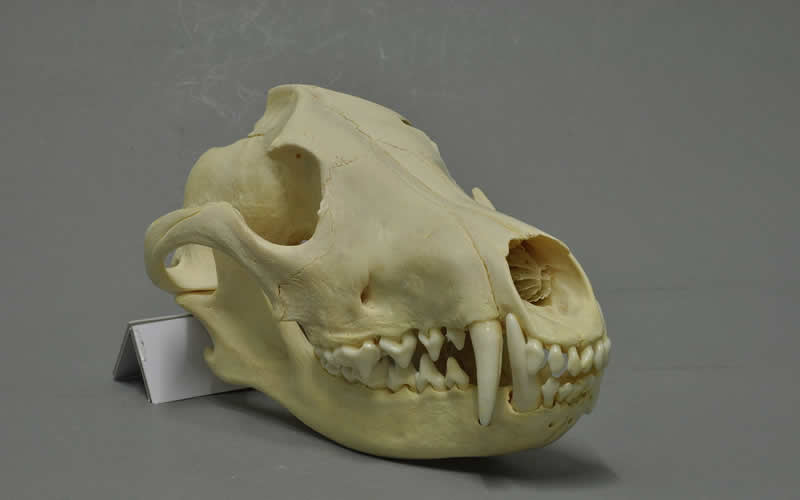 The skull of a maned wolf almost identical to that of our dog’s skull. As it does not kill or eat large prey, its upper carnassials (shearing teeth) are reduced, its upper incisors weak, and its canines are long and slender.

The maned wolf really blows the theory of our pet dogs needing meat in their diet completely out of the water. These beautiful and endangered ‘golden dogs’ (as they are neither fox nor wolf), share far more in common with our own pet dogs than the grey wolf.

They are classed as omnivores and live in the savannah of South America where they feed primarily on wolf apples that belong to the family Solanum – the same family as potatoes and tomatoes. These fruit are also eaten by humans in South America, but the maned wolf plays a very important role in the seed dispersal of these fruits.

Often, maned wolves defaecate on the nests of leafcutter ants. The ants then use the dung to fertilise their fungus gardens, but they discard the seeds contained in the dung onto refuse piles just outside their nests. This process significantly increases the germination rate of the seeds. They live beautifully in harmony with their environment and this delicate balance must be maintained.

They do hunt at night (typically small rodents and rabbits) but more than 50% of their diet is fruit and vegetable matter. Animals are more often consumed in the dry season as their first choice is vegetables!

Their eyes are similar to our dogs, they lack the jaw strength to be strong hunters (like our domestic dogs) and their footprints are very similar to our dog’s prints. They are parasitised by the same ticks and fleas as domestic dogs and they are also prone to catching the same viruses that we vaccinate our pets against. Their gestation period is the same length and when pups are born, they are born blind initially like our pups and the mother will regurgitate food for her young pup and teach it to forage from as young as 3 months old so their diet of vegetable matter begins as early as that.

As they are an endangered specie, they are successfully bred in zoos around the world. If they are incorrectly fed a high meat diet, they develop bladder stones – something seen commonly in our domestic dogs too! Interestingly, they also have very pungent smelling urine which is used to mark their territories and some people liken the smell of their urine to hops or cannabis. The responsible substance very likely is a pyrazine, which also occurs in plants (at the Rotterdam Zoo, this smell once set the police on a hunt for cannabis smokers!)

This beautiful and fascinating ‘golden dog’ surely holds the key to our dog’s nutrition and strengthens our belief that we should be adopting a plant-based diet for our dogs as the kindest and healthiest option possible. If not for our own dog’s health, then surely for the health of the South American savannah so that less land is used up by deforestation for meat agriculture and these endangered species can continue to live in perfect harmony with their environment.

See how to make natural 'foraging' activities for your dog

“As a vet, I believe in a kinder, healthier way to feed our pets that does no damage to our environment, harms no animals and uses fresh, healthy plant-based ingredients for a balanced and delicious diet”